Back Racing in a Park today, on the Grass and Mud of Cyclocross.

Balloch park is a great location for me. A 20-minute drive away,  I arrive without getting lost this time around, always a good start to the day.

Even better news, the hills leading up to Balloch Castle on the grounds will not feature today, I really thought we would be up and down those suckers! Bonus!

A little lap around the course to find my bearings, it’s a fast course with the ground holding well. Dodged a mud bath for another day.

Chat with a few people, Some RCCK guys are eyeballing me after I took one of their own out on my last visit to a park, Kilmarnock Crits. (only kidding they were cool but did tell them to stay clear just in case)

like good Cross Soldiers. I bag a good spot on the front of the line, this is my moment to shine!

21 gun salute goes(well we can imagine that).
Bang goes the starter’s gun and we are off, to a shite start for me, absolute mince! Think I have a drunk foot? It’s got a mind of its own! Wants to turn around, think it likes the start line.
Sober it up with a bang on the pedal, get it clipped in and manage to pull back some space before we hit the narrowing sandy track.

This point I am eating places up. Diving down the inside, belting through the bushes, weaving around the weeds to gain places. I finally get some clean air. Sitting top 15-20 for now I think.

Settle it down, keep picking people off is my aim.

The course is made up of some gravel paths around the picturesque walled garden, smelled great there too. After that, we came up stone infested path taking riders out into the lush grass hills, down through some zigzag bends.

Hated this half of the course.

I was junk on the gravel, didn’t trust going at any speed there as I felt I had no grip. Then came the hill which was alright but it’s still a hill. I had the same situation on the grass as I did on the gravel. No grip so took it easy. Something to work on midweek. 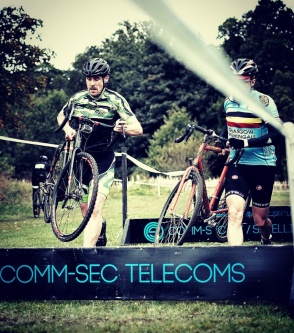 I think the problem was my tyres were overinflated, so that’s something for future races. (Every day is a school day).
Once zigging and zagging was done with, we were racing down a jungle trail through some long grass. Out onto the sandy path heading for the starting arena. Sandy path sounds tough on the legs, it’s actually held together with square plastic matting making it firm, which gave you a good bit of speed if you could manage it.
Once into the arena, you took a sharp left. Letting you look into the whites of the leader’s eyes while they concentrated hurdling over the trio of barriers.

Time for me to do 180° turn to the right and attack the barriers. This was my strongest point in the race. Only if they had a barrier every 100 yards I would have smashed this race.
Back on the bike, hang left then sprint to the line.
Now to repeat for 35 minutes plus one lap.

Race calms down a bit. See the front bunch go over the line for another lap, they’re not too far ahead. Keep pressing on 15 minutes on the clock I’m 7th-8th, good stuff. With my pressing, I am starting to gain some ground on lead riders. I get confident and smart on last grass zag and lose my back wheel, spinning 180° on one knee, a bit like an 80’s break-dancer on lino but with a bike attached to my other foot. 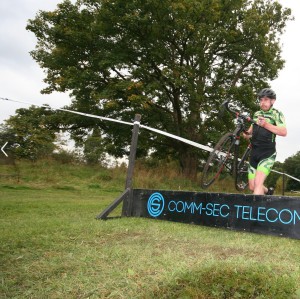 With that happening, I lose all confidence in my turns in this area. Lose time on leaders too.
Hating on the Gravel/Grass combo half of the course. Loving the barriers, fast sandy sections. Lose a position every time I hit the gravel section to a Glasgow Nightingales rider but seem to have the better speed over the barriers so were locking horns for a few laps until he manages to drift off into the distance.

“Right numb nuts get this finished” is the brief chat I give myself. Two laps left, stop being scared of the course, face your nemesis and conquer it. It appears I bottle it! Another position is lost. Dang!!!

Still in the fight, I can still see riders up ahead they have just taken the lap bell. “I can do this“, “get them“. Charge! Until I hit the gravel then slow to a reasonable speed. The Wee voice in my head is telling me “don’t fall and lose another blinking position“.

Glad to wave bye to the bad half after easing around it, embrace the good half of the course where I get some speed up. Hop, Skip, and a Jump over the barriers and belt around the lefthander, take the flag.
Woohoo, that was a good ride even after my spin on the grass.

Can’t wait for more manoeuvres in Balloch park next year already. Massive thanks to Glasgow United for being a great host.

As usual, the fun begins with teammates coming over the line. All getting together and swapping stories of race, Some doing better than others.

So I had a deal with the Team Director, I finished top half of the race I get to sign up for Callander Park next week.

Top 10 baby, just managing to scrape into tenth. That was my goal for today to make the top ten.
Target is done.

Up next is Callander Park 11th October.

This is going to be my first Scottish Series Race.

I will be in with the Senior Men,  defiantly won’t be top ten. Doesn’t mean I wouldn’t give it my all.

See you all there folks.

Thanks to Kevin Pugh and Victoria Atkinson for letting me use their photography skills.