Beep beep beep beep, the noise of the alarm at 6am gets me up and out from the comfort of a warm bed. Drag the poor dog out into the cold, and I wake up to the morning of the Scottish Cyclocross Championships.

The early alarm is for me to get some food made then load the bikes onto the car, double check I have packed everything before I go and pick DNF Dougan up at 8am. We have just short of a three hour drive up Aberdeenshire and another new venue for me this year of Knockburn Loch.

Break some crusts of cow shite as I roll the car over the field and into a cow pat free zone in the already busy Knockburn Loch Outdoor Sports Center and it’s just clicked past 11 am. One of the earliest times I have been at the races. The regular routine is to tumble out the car, get my numbers on and then race. With this one, the long drive I wanted to get here and get blood to my legs by having a scout of the course and see a bit of racing.

The start of the week brought some snowfall to the course, turning it into a white wonderland. A rapid defrost midweek took it right back to a standard green and brown tone just in time for race day. Now the course I have in mind is going to be a mud fest with the quick thaw. I am wrong as its actually holding out really well as I take in the V50, Women and Junior race. The ground is still hard under the top inch of grass so the mud fest might not be on the cards after all.

The battle to be crowned Scottish V40 Champion has just kicked off and I now have just over an hour to get my numbers pinned on and sort myself out, then get to the start line with a little detour of a few laps of the grass velodrome.

Sixty-nine riders line up for the Scottish Open Cyclocross Championships, while the top twenty riders or so get gridded the cold wind picks up, and I am eager to get going and get a bit of heat into my bones. After a long hold, the whistle finally blasts, and the race begins. We are off to a flyer as we batter along the grass and sprint down the start shoot. From walking the course I planned to keep left of the course, I manage to execute my plan, and this gives me a good line to shoot up the small incline and then hustle along the soft ground making our way to the woods.

Still riding on the left of the course as we narrow through the entry gate into the woods. Davie Hamill is just in front of me and has the same idea in mind. Both of us dismount and get running when the speed slows, and the bottleneck grows. I gain a few places while pushing the bike, but a lousy remount kills my momentum, and the positions are soon lost. The wood section has a great flow to it, your eyes have to be peeled though as there are plenty of roots waiting to knock you to the ground. (Gary found this out later on in the race)

A fast pedal past the pits after negotiating the first slippery little hill takes you over the bridge and around to the back of the Loch. This brings you to the highest and hardest part of the course. On the first part of the climb, my bike is making some spectacular crunching and grinding noises. My freehub will need a wee looking at, it’s not engaging when I put some power through the pedals, making it skip just like last year at Bute. I lose a heap load of places while I nurse the bike up to the top. The climb isn’t over as I get to the top, we hang a right, and now a slippy grass incline is on the menu.

I use a bit of advice before the start of my race, I got told to get off and run the short muddy downhill section, and then keep running when the gradient turns uphill again. The bike stays on my shoulder as I drop down between the gorse bushes, then keep on trudging to the top of the never-ending hill. As I crest the summit of Knockburn Everest, a magnificent sight comes into my eyes. A 200 meter decent, and is a joy to behold.

It is also a joy to ride, but the mud flicking into one’s eyes isn’t so helpful with where you are pointing the front wheel as you rattle down the hill. Ride around the Loch and back over the bridge passing the busy pits. Now comes the fans favourite. The sand trap! Ride up and over a red gravel hill, try to keep the speed up and power through the sand/gravel, hoping I don’t come off and make a fool of myself in the cat litter box. Manage to get to the end of the pit without incident and ride out into the finishing field. 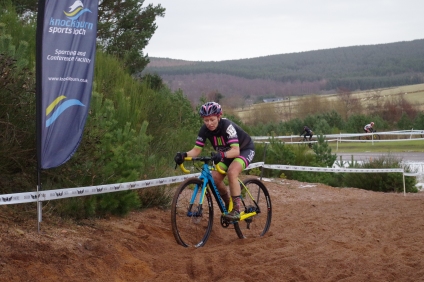 Ride past the finishing line and with George Stewart’s advice being spot on about the hill climb, I decide to take him up on his other words of wisdom. He told me that the S bends behind the timing van are cut up and slightly slippy under the tyre. Again that the best option is to get off and run them. Roll down the first hill the swing off and get my running legs going. Back on the bike on the last turn and ride down the long grassy decent, back to the left of the course as I ride the hill up and along into the woods once again.

The woods were a joy to ride with a bit of space in front of me as the race spread out as the laps grew. The hill climb became harder and longer with each passing lap. The 200 meter decent never changed with every lap. That was always a blast to ride down, but I know a few people didn’t enjoy it as they shipped their chain as the battered down at high speed. The cat litter tray I managed to ride every lap except for the final time, where I ground to a halt and dropped down like a dead fly. (But thankfully most of the spectators and cameras had moved around to the finishing field) The S bends I enjoyed every lap, as I kept it simple and didn’t even to entertain the thought of trying to ride them, a 99% chance that I would fail and end up in a tangled mess at the bottom of a hill, with running them it gave me a chance to gain a lot of time on riders ahead of my front wheel. 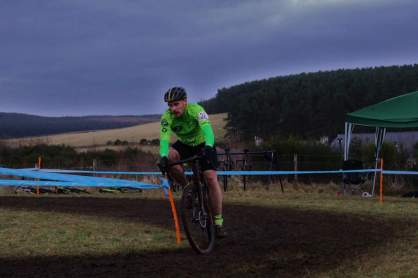 I get lapped once while I am plodding through the course and as always I am in awe of how fast the top riders can get through a lap. My bike holds out for the full race, and the weird crunching noise doesn’t return in my 6 laps of Knockburn Loch which is a huge relief. I take the finishing flag after 1hr 6mins of riding and finishing 47th place. The other two-wheel-army rider Gazza came in 35th in his first champs with is an excellent result for the novice rider.

Huge, huge thanks to Gordon Watt and his merry band of Deesiders that bring a heap of Northen Soul to Cyclocross racing in Scotland.

Huge congratulations to all the Scottish Champions and to every rider who rolls over the start line week in week out. All results are here.

All the best over in Mull with round 6 of the Lapierre Scottish Cyclocross Series and also the Santa Cross Champions on Sunday.